AT HOME OR IN A RELAY POINT WITH TRACKING NUMBER

AVAILABLE IN YOUR CURRENCY

SELECT YOUR CURRENCY AT THE TOP, NEXT TO THE LOGO

UP TO 14 DAYS AFTER DELIVERY

A child of the Norse god Loki, Jormungand, the 'Midgard' or World Serpent is the greatest ouroboros.
• Encircling the ocean which surrounds the world ; should the 'huge monster' release his own tail, the world will be at an end.
• The serpent's body is engraved with runes upon the front reading "Jormungandr Miogarosormr", which translates to 'Jormundgard the World Serpent'.
• In Norse mythology, Jormungandr also known as the Midgard Serpent or World Serpent, is a sea serpent, the middle child of the giantess Angrbooa and Loki.
• According to the Prose Edda, Odin took Loki's three children by Angrbooa-the wolf Fenrir, Hel, and Jormungand-and tossed Jormungand into the great ocean that encircles Midgard.
• The serpent grew so large that it was able to surround the earth and grasp its own tail and therefore received the name World Serpent
• A robust, antiqued and polished pewter circular buckle in the form of a Celtic dragon swallowing its own tail, engraved with runes around its body.
• To fit all 1½" (3.7 cm) wide belt straps.
• Alchemy Gothic belts are sold separately.
• They are available in three sizes.
• To discover them, please click here
By Alchemy metal wear 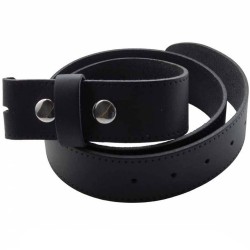 To ensure payment security, the entire payment process is carried out on the secure banking servers of our partners Amazon Pay, Skrill and Stripe. These services integrate the SSL security standard (https). Consequently, all your confidential data (16-digit bank card number, expiration date ...) are transmitted encrypted (coded) from your computer to Skrill or Amazon Pay servers. They therefore do not pass through the www.thedarkstore.com site and are therefore neither known nor recorded by • the dark store ™. Payment by credit card is therefore perfectly secure; your order will be recorded and validated upon acceptance of payment by the Skrill secure payment platform and by the store; your order is automatically recorded in your customer account if you have created one. In addition, in order to protect your data even better, all pages of this site are also fully secure (https with SSL certificate), which means that all your data is encrypted and impossible to recover.

For optimal traceability of our shipments, all of these are carried out with tracking, which allows you to follow your package step by step.

The shipment number is entered directly in your order, you just have to click on it to have access to the tracking.
In order to be able to guarantee you an optimal service, we thank you for always giving us a telephone number where you can be contacted in the event of a delivery problem, or to allow the carrier to notify you by SMS of the availability of your package.
In addition to the possibility of having it delivered to a relay point, you can give us as many addresses as you wish, if you wish to have it delivered to a friend's place, for example, to your place of work or holiday resort. 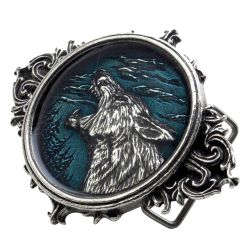 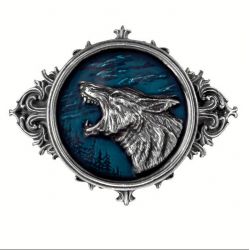 Old English for 'of the wolf '... a gothic frame focuses a chilling profile of one of these children of the night. With translucent, smokey blue enamelled moon. • A gothic tribute to children of... 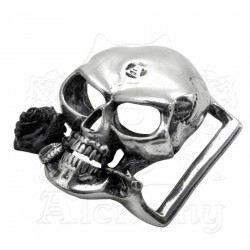 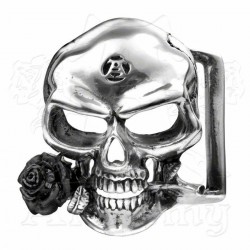 The original Phylosophus Magus portrait; set with separate black rose. • This Alchemy metal-wear belt buckle is made in high quality English pewter in Sheffield (England) and is intended for... 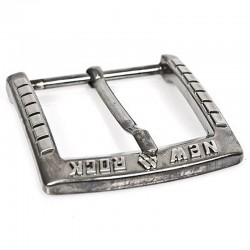 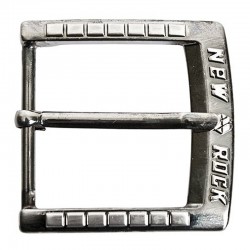 Simple and effective, this belt buckle is perfect for all styles, while being signed by the famous footwear brand ... • To go perfectly with this belt buckle, we offer 1½" (3.7 cm) Alchemy Gothic... 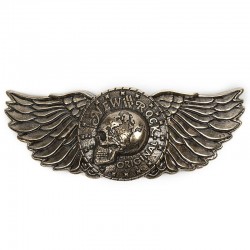 Look after your look at the end of your belt with this beautiful belt buckle representing the winged skull brand New Rock. • To go perfectly with this belt buckle, we offer 1½" (3.7 cm) Alchemy... 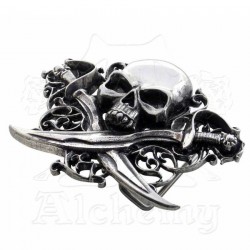 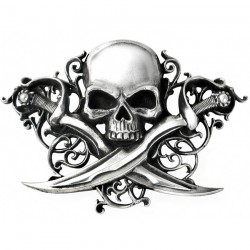 A feared pirate's crest of skull and crossed sabres, is a warning to all those unfortunate enough to it! The 'Letter' was an official Royal warrant given to 'privateers', authorising them to seize... 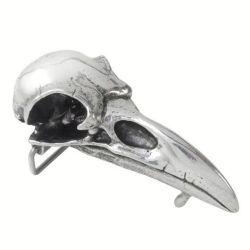 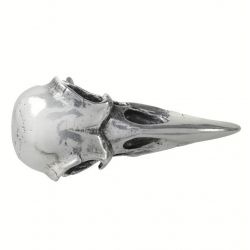 German for "raven's skull"; the great black bird is famous for it's prophetic powers, being Odin's messengers and capable of foretelling death. • A three-dimensional buckle for the pagan warrior... 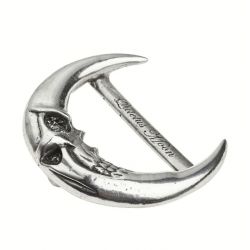 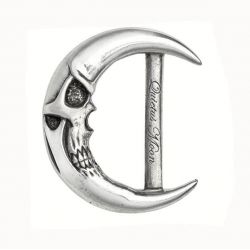 The man in the moon is not always the happy avuncular gentleman of fairy stories, and when backs are turned... • A classic D-shaped, crescent moon themed, polished pewter belt buckle in the form... 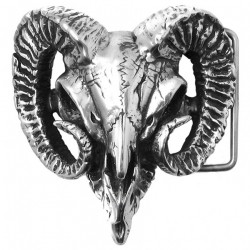 Representing power and the vital forces of nature, and often, a standard for the pagan warrior. • Sacrificed to gods by Abraham, the Romans and Druids alike. • A three-dimensional buckle for the... 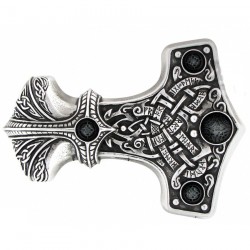 The Norse god Thor's mighty weapon of utter destruction for this belt buckle. • This Alchemy metal-wear belt buckle is made in high quality English pewter in Sheffield (England) and fitd with... 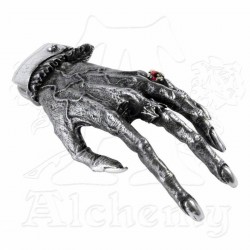 A vision from a gothic horror, the withered, yet living hand of the infamous undead master, insensitively embraces the strap ; in dark pewter with polished highlights and red cabochon ring. •...